Group A Qualifiers: The Zooms

As the fanfare of the opening ceremony dies away, the first teams are led onto the pitch on this glorious day in Oberköchen. With temperatures of 25° in the shade, conditions aren’t going to favour the Sigma camp, whose squad is notoriously prone to rampant jaundice in sunlight.

With the Canon 16-35mm f2.8 L on the bench, the Nikon 17-35mm f2.8 plays the role of quality mass-produced centre forward today, preferred by the head coach over the red-headed veteran, whose form has been patchy in recent matches.

Despite its youth, the Sigma 12-24mm earned its place in the squad with consistent performances in the difficult ultrawide role. There is a feeling in the training room that it might be out of its depth in this competition – but will the lack of experience count against it today? We’ll have to see . . .

Leading the players onto the pitch now is the diminutive striker Leica: four inches of German genius, legendary for its silky skills in the box and much fancied as tournament winner this year.

Before kick-off, let’s go to the player stats: 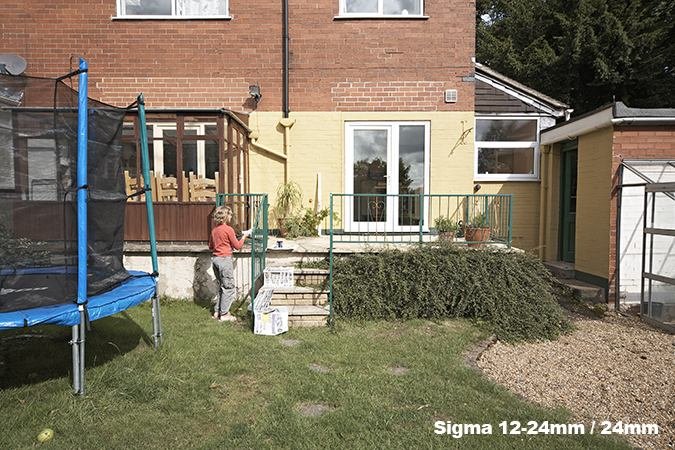 The one area in which the Sigma 12-24mm scores unquestionably over the Leica and Nikon is that of geometric distortion: straight lines are captured ruler straight. The Nikon’s distortion pattern is less pronounced but tougher to correct: awkward waveform/pincushion; whereas the Leica’s unform barrel distortion is more noticeable, but less of a problem to fix.

Here’s what happens when you shoot walls with them: first the Sigma, then the Nikon, then the Leica:

Note also that, even when reduced to 50%, the Sigma’s corners are still unsharp; the Nikon’s the best.

Ouch. Conspicuously-in-need-of-attention CA problems with the Leica – quite unexpected at f8. Despite being softer than a fairy’s hanky, the Sigma demonstrates truly exemplary geometric and chromatic aberration control. This 200% crop also confirms that the Nikon 17-35mm captures more information than the Leica at this aperture.

[nextpage title=”Through to the Final…”]

Tallying the points out of a possible maximum score of 16 gives us the following results:

Obviously the reduction of all areas of a lens’ performance to a single number can’t help but grossly over-simplify its worth. However, focusing solely on resolution, distortion and aberration, the numbers don’t lie.

If we factor in colour rendering, there is little to shift the evaluation either way: the Sigma is horribly yellow; the Leica and the Nikon are both outstandingly attractive. Personally, I prefer the Nikon for blues, and the Leica for reds and greens. The Leica is more forgiving with shadow detail; the Nikon has better contrast.

If we factor in build quality, one would hope that the Leica is better screwed together than the Nikon, given the price difference. Both feel rock solid – but the Nikon is much smoother and more positive to focus and zoom. Naturally the Sigma feels second tier, but it’s a lot cheaper.

If we factor in utility, the Sigma is autofocus and covers wider focal lengths. The Leica is clearly less useful than the Nikon, but is considerably smaller. Both require stop down metering. The Nikon’s slightly faster aperture and much bigger elements makes it easier to focus manually.

Bokeh and flare were not tested in this review.

It should also be noted than on a Canon 5D, the Leica 21-35mm’s rear element is too close to the mirror at the wide end to project an unimpeded image circle. No problem with the 1Ds I and II. For details on how to mount this lens on a Canon EF/EOS body, please see the compatibility pages.

All told, then, the Nikon scores a narrow points victory and proceeds to the next round where it confronts the cream of the primes in the semi-final stage.