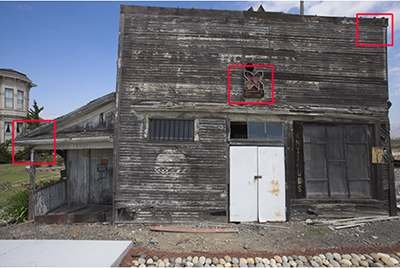 All images shot with a Canon 1Ds Mark II in RAW, processed in 8 bit via Raw Shooter Essential and converted for web with BoxTop Pro.

First round to the Zeiss, then: excellent centre frame resolution at f8.
Second place to the Olympus, just extracting a little more detail than the Canon 16-35mm f2.8 L bringing up the rear, but by no means disgraced here.

Towards the frame edge (this is not a 100% crop from the extreme edge), the Zeiss 18mm just holds onto the lead, but the Olympus (which has the advantage of being at f11) is very nearly as well resolved. Once again the Canon struggles in this company.

But here’s the kicker: out here at the edge of the image circle (note that these are not 100% crops from the extreme corner), the Olympus retains strong resolution much further out than the Zeiss 18mm, which is marginally outperformed by the Canon zoom. The Olympus shot is also much more evenly illuminated, with less vignetting. It should be noted that the more diffuse light on the Canon shots favours the other two somewhat, but notwithstanding this, the marginal performance of the 16-35mm clearly can’t match the Olympus’.

Some have criticised Mike’s test for not being on a level playing field: inasmuch as the Olympus is stopped down further than the Zeiss or Canon. However, Mike’s testing of numerous samples of these lenses (only the best are compared here) revealed these apertures to be optimal for each lens. If you’re wondering how the Zeiss 18mm’s extreme corners look stopped down to f11, the answer is here, where a mint MM sample is compared to the Nikon AFS 17-35mm.

Bottom line: the Zeiss 18mm is better than the Olympus centre frame, but the Olympus 18mm has very even performance across the frame. And both convincingly outclass the Canon 16-35mm. It is worth noting that six separate 16-35mm L lenses were sifted through and found wanting before this prime specimen was found. So if you’re thinking: ‘bad sample’, the truth is that this one is probably about as good as it gets. Which is why off-brand wide angle lenses are so popular right now….